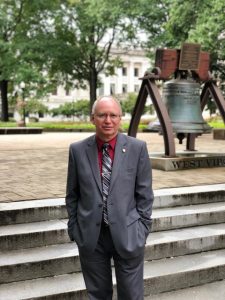 Delegate Guy Ward is honored to have served the people of the Fiftieth District of the West Virginia House of Delegates, which encompasses all the precincts in Marion County except one. Having been elected to the House of Delegates in 2016 and 2020, he is again running for re-election to a third term for the newly formed District 74.

Over his two terms in the House of Delegates, he has served on the following committees: Energy; Government Organization; Health & Human Resources; Small Business; Industry & Labor; and Fire Departments and EMS. He’s been the co-sponsor on numerous successful bills relating to such things as drug addiction, veterans’ benefits, gas production, job creation and public safely.

Guy Ward first entered politics by being elected to the White Hall Town Council in 1997. After 14 years as a prominent Council Member he was appointed in January 2012 to the Marion County Commission to fulfill an unexpired term. In 2013 he ran for and was elected Mayor of White Hall and stepped down in 2019. He chose not to run for a fourth term as mayor.

As Commissioner he did a lot in his one year in office. He did such things as helping resolve issues at several Water Associations and Public Service Districts. After a major flood in Marion County, he was instrumental in helping acquire over $300,000 in grant money to cleanup areas hit by flooding. He was and still is a big advocate for Volunteer Fire Departments and helped acquire a Genesis Rescue System for the County (the first of its kind in the state) and an underwater rescue camera.

When Guy took over as Mayor, the Town of White Hall was in financial trouble. The Police Department was way over budget and spending was out of control. Within the first few days as Mayor he made drastic changes to spending and discovered a shortfall in the wine and liquor tax. The Town had lost nearly $250,000 during a ten-year period because of mismanagement in State Government. Taking on the West Virginia Tax Department, he was able to recoup some of the loss and redirect the taxes to its proper recipient, the Town of White Hall.

A true conservative, Mayor Ward took a Town that was in financial trouble and at the end of his first year in office, he increased revenues, eliminated wasteful spending and created a surplus of $103,000. All this for a Town that has an annual budget of about $750,000. Plus, he did it without raising any taxes or fees.

Born and raised in Grafton, West Virginia, Guy Ward graduated from Grafton High School in 1974. He attended Fairmont State College after high school where he earned an Associate of Applied Science degree.

With over 33 years of service, Guy took an early retirement in 2011 as a Material Analyst for First Energy. After retirement, he was employed for about two years at the Fairmont Community Development Partnership as the Operations/Projects Manager, which is a non-profit organization that provides low to moderate income housing.

Guy and his wife, Joyce, live in White Hall. They have one son, Christopher, who lives in Colfax, West Virginia.