Why did Delegate Guy Ward quit going to Phil Mallow’s luncheons? Simply put, he didn’t like being treated like a second-class citizen and being lied to.

Of course, there are attendees who think Phil tells no lies, who then go and spread this kind of misinformation thinking it’s true. Fortunately, not all attendees believe what he says because a few of them have had the courage to record some of his luncheons. Phil has a small following and they probably believe every word of what he says, which is sad. They are being misled. In this article are recent examples of him spewing untruths.

Just prior to the primary, Phil had candidate Mike DeVault come speak at this luncheon. Following are FALSE STATEMENTS that were made there.

DeVault said and Mallow agreed, “Right now, if you want to open, let’s say we want to take this restaurant out, and put a nursing home in, we have to get a certificate of need. Now who do you think gets to vote on your certificate of need? The other hospitals and nursing homes and operators, so sounds like a little protectionism to me from the old days of West Virginia.”

To Fact-checkers this would be a PANTS ON FIRE FALSE STATEMENT.

THE TRUTH: Other hospitals don’t get to vote on a new hospital application. They don’t have a voice in who gets approved or denied. According to the WV Health Care Authority, this is how it’s determined: “Need is determined using CON Standards, which generally include population-based quantifiable need methodologies. Financial feasibility includes the evaluation of the reasonableness of proposed charges to patients and the determination as to whether the expense and revenue projections demonstrate fiscal viability for the proposed project. Other review criteria include quality, accessibility, and continuum of care.”

Both DeVault and Mallow showed in their conversation that neither one of them either didn’t understand what a Certificate of Need does or does not do or they lied about the whole process. Mallow should know better because he attended a Health Committee meeting where Barbara Skeen, Interim Director of the WV Health Care Authority, came and explained the process. Either he wasn’t listening, or he doesn’t care.

Another thing they made FALSE STATEMENTS about was concerning a Political Action Committee called Mountain State Values (DeVault called it West Virginia Values) saying that they want to get rid of Republicans. Really? Then why do they support Republicans? Isn’t that kind of stupid on their part if they want to get rid of Republicans and then support them? Not only is this a STUPID statement but it’s a FALSE STATEMENT.

All of these candidates are Pro-life, believe in the Second Amendment, are fiscal conservatives, support lower taxes, less government, etc. So, why did Mountain State Values support them? Because unlike a lot of Republicans who cater to just the rich, these candidates support the working class too.

And if eliminating Certificate of Needs was so great, why are Republican legislators in states like Indiana wanting to bring it back after it was eliminated years ago?

Here is a partial segment of a recording that was done of this luncheon:

Another example of FALSE STATEMENTS is Phil speaking at one of his luncheons on April 27th. There were about 30 individuals in the room, and it was open to the public.

Two COMPLETELY FALSE STATEMENTS he said at this luncheon:
• He accused the Hospital Association and Mon Health of offering him $1,000 toward his campaign if he supported a bill. Complete slander against these two institutions and if he was offered a bribe, why didn’t he report it to the WV Ethics Commission?
• He also accused a Delegate of taking a $5,000 bribe. He didn’t mention this person by name. So, who was he referring to. It wasn’t Delegate Ward, and he can prove it.

Following are pages from a Primary Report showing the legislators who received contributions from the West Virginia Hospital Association PAC and the amount on April 5, 2022. These are not bribes. Political Action Committees donate to campaigns to those who support them during their term. 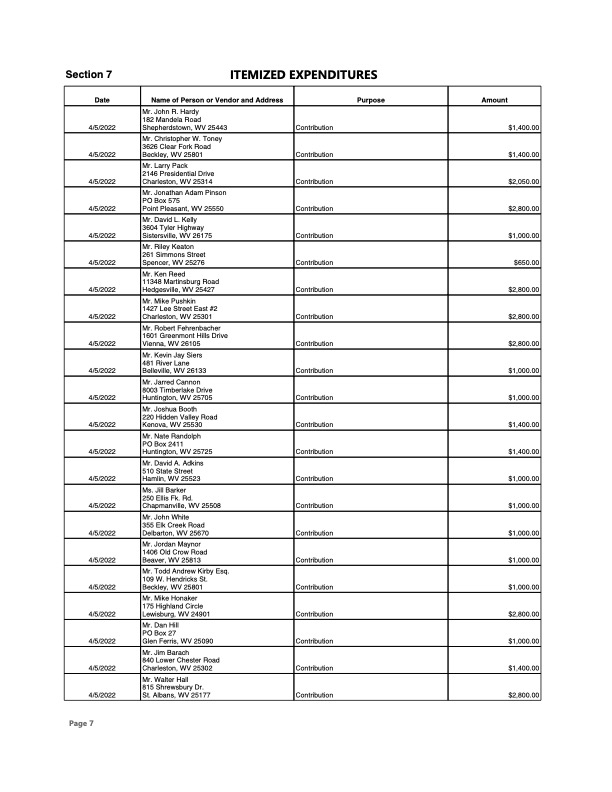 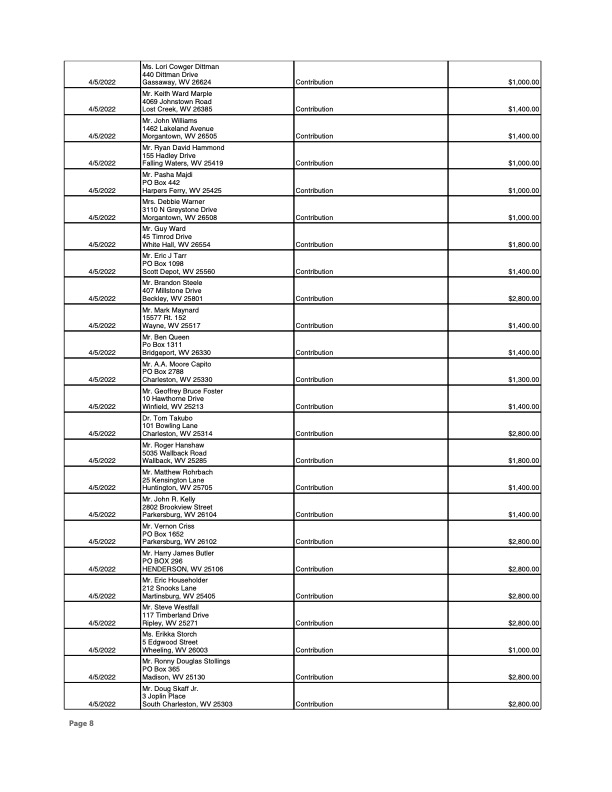 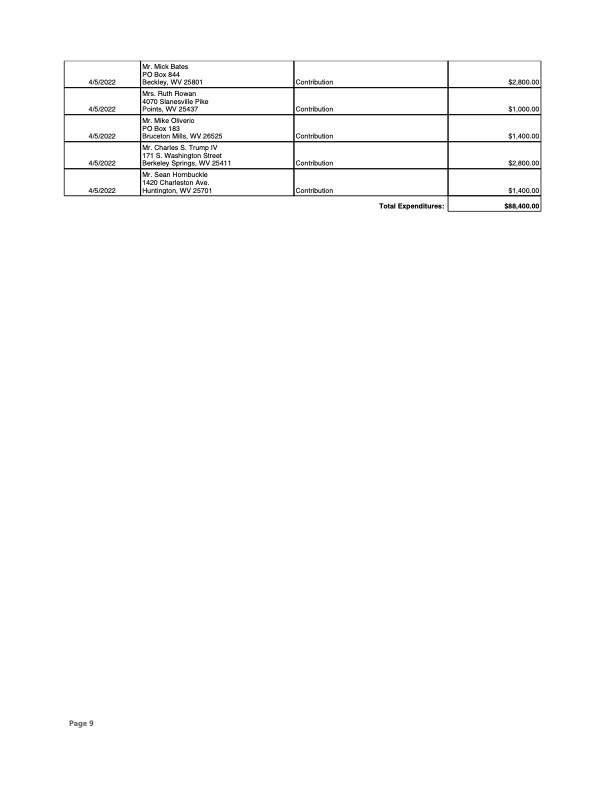 None of what Delegate Mallow said is true. No contributions are promised to candidates for their vote. Again, this is illegal and if a lobbyist or advocate got caught, they would be in a lot of trouble. Also, Mon Health doesn’t give donations to candidates anyway.

The recording of this luncheon has been shared with the Hospital Association and Mon Health, and both organizations have denied doing this and have considered legal action against Phil Mallow for his slanderous statements about them.

He also talks about several Delegates without mentioning names who were being primaried as if they were not being good Republicans, but he was. Ronald Reagan’s eleventh commandment was, “Thou shall not speak ill of a fellow Republican.” Yet that is what he did at this luncheon and many other times.

Several dozens of legislators have listened to the audio of Phil’s luncheon. Many of them have lost respect for him if they hadn’t already. Many lobbyists have listened to this too and are now leery about him. Just check his financial reports and see how much he’s being backed. For an incumbent, it’s doesn’t look good.

Many of these statements are not just FALSE STATEMENTS but they can be construed as outright LIES.

Here is a recording from that luncheon and below is a partial transcript of his talk on April 27th. At the end of the transcript, please be sure to check out the footnotes. The footnotes help explain some of what and who he’s talking about.

PARTIAL TRANSCRIPT OF PHIL MALLOW SPEAKING AT ONE OF HIS LUNCHEONS (See Footnotes below that correspond to numbers in parentheses)
April 27, 2022

“Somebody else voted for a bill that says, other hospitals want to come, other healthcare facilities, nursing homes, hospice, they want to come into our county, or into our state and we have to get the approval of the current hospitals in order for the new hospitals to come in. (2)

“We had a person that voted for that. He wants to maintain what’s called the certificate of need, okay. Well, actually, several people. And we have another one that says that currently, (waiter interrupts) currently if you have a loved one … what is it Gary … currently if you have a loved one that dies or falls and from that injury dies in a healthcare facility. You have two years to challenge that with an attorney. They tried to bring that back to a year. Now if you not doing anything wrong and you’re not hiding anything, why would you try to drop back your reaction time from two years to one year? (3)

“We had an individual that voted, said, ah let’s drop it back to a year. You know why, because the Hospital Association, nursing home group, said to this individual, I’ll give you a thousand dollars for your campaign. (4) You think that didn’t happen? They called me in my room at 9:41 the night before from Mon General (5) and said, we can help you out, but we really need a yes vote on this. Sorry, you’re talking to the wrong guy, I voted no but we lost 58 to 40.

“Now, if you make votes like that, that separates you so dramatically, from everybody else down there, two things. One, you’re going to be primaried back in your in your county because all of you that track these votes, and, and you may not do it, but we’re trying to get eh Lou Yelcich, wants to put, I’m going to him a thing to put on the wall to show you how to go into the West Virginia website and look up a bill. You can put it up all the House bills, all the Senate bills, subject matter, by Mallow, by whoever proposed it and put it in there by House or whatever and there’s the bill and you can go down and you can read the text and if you can click on the highlight, the hyper-text, and it will tell you, it will show you this, it will show you the roll call vote. The yeas and nays, who was absent and everything.

“Well, when we have that, people at home are looking this up and saying, “Holy smoke, my guy or my gal voted against something that everybody in the state wants.” Okay. But now they’re being alienated by the leadership, and the Republican National Committee, Republican State Committee, state executive committee, is out to get them. (6) Bull me.

“And the bottom line is, you miss a vote. But if there’s a hundred of us and ninety-six people are voting and two vote against it. Are you arrogant enough to think the other 94 are stupid?

(Talks about the procedure on how a bill goes through the House voting process, which he got wrong on several points).

“Hundred sets of eyes will find something that the original committee perhaps missed, okay. It’s a great design but the thing about this if ninety-four people read it, followed it, went to the committee meeting, and said, you know what, I agree with it, and two people said I’m not for it. Kind of makes you wonder. Kind of makes you wonder, who are you representing? Is someone out there giving you five thousand dollars to go down and give a no vote. There’s something wrong with that picture. But those two people, or those four people, or those six people, will say, “I’m being primaried back in my county.” It’s not the way it works.”

FOOTNOTES:
(1) He’s talking about Laura Kimble and Chris Pritt who voted against SB1001 during 1st special session 2022.
(2) Ultimately, when HB4643 was amended on the floor to eliminate CON, the vote was about 60% against with the majority of the Republicans voting against it.
(3) SB25 – He talked like it didn’t become law, but it did. Delegate Ward voted against it too. But the leadership supported it.
(4) He’s making this up. This doesn’t happen.
(5) He meant Mon Health. The old name was Mon General, which a lot of people still refer to it that way.
(6) This statement seems to show that he knows more of what is going on behind the scenes. Who was the mastermind behind recruiting candidates to target certain Republicans in the Primary?
(7) Several Delegates still have 100% ratings including Delegate Guy Ward.