Voters beware! David and Charles Koch, the founders and biggest contributors of the Americans for Prosperity who are backing Mike DeVault, are Never Trumpers. They would not back President Trump in 2016 or in 2020. Source Fox News

Donald Trump called the founders of Americans for Prosperity (the Koch brothers) “globalists” and a “total joke” with a “highly overrated” political network.

Trump tweeted in 2018 when they attacked his trade policies: “The globalist Koch Brothers, who have become a total joke in real Republican circles, are against Strong Borders and Powerful Trade. I never sought their support because I don’t need their money or bad ideas.” He also tweeted, “They want to protect their companies outside the U.S. from being taxed, I’m for American first and the American worker — a puppet for no one,” Trump tweeted.

The Koch brothers and their organization are not Republicans. They are Libertarians. They have even been known to back Democrats. Source The Guadian

The long-standing conservative Koch network, which did not support President Donald Trump in the 2016 presidential election, also signaled that it would be willing to back Democratic lawmakers on issues that reflect the organization’s priorities.

Referring to the Koch brothers’ ongoing lack of support for Trump, Steve Bannon said “they were the first people to put the knife in [Trump’s] back.” Source Newsweek

The Koch brothers are globalist according to Peter Navarro’s book “In Trump Time.” A globalist is someone who believes in a one world economy. That’s why the Koch brothers and the Americans for Properisty oppose President Trump’s “Make American Great Again” agenda.

The Americans for Prosperity are the Koch Brothers weapon to use against Trump Supporters. Billionaire Charles Koch, Board Chair of the Americans for Prosperity, is increasingly distancing his multiple organizations from Trump and his supporters in Congress according to Fox Business News. In other words, he wants puppets and if you don’t do as he says, he pulls his support.

You may have seen one of these misleading mailers or maybe you have seen their ad on Facebook. 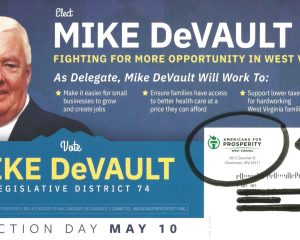 Do you want someone who is supported by Never Trumpers or do you want a true Trump supporter?